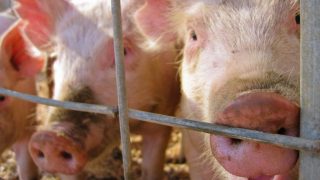 Topeka, KS – Today, a coalition of public interest groups filed a lawsuit in Kansas challenging the constitutionality of the state’s Ag-Gag law, which makes it a crime to document animal cruelty at factory farms and slaughterhouses.

Enacted in 1990, the Kansas Ag-Gag law is the oldest in the United States. Kansas is a major producer of cows, pigs, and other animals raised for meat. Virtually all of these animals are raised in inhumane factory farms where animals undergo routine mutilations, intensive confinement, and — ultimately — cruel slaughter. The law has successfully prevented whistleblowers from investigating the cruel conditions that millions of animals endure. Recent undercover investigations at animal agriculture facilities outside Kansas have uncovered cruel and illegal treatment of animals, as well as health and worker safety violations.

“The Kansas Ag-Gag law has silenced whistleblowers seeking to protect animals from cruelty for far too long,” said Animal Legal Defense Fund Executive Director Stephen Wells. “This unconstitutional law exists solely to protect the financial interests of industries that abuse animals, and it will not hold up in court.”

“Americans want and deserve more transparency into how their food is produced, not less,” said George Kimbrell, Center for Food Safety’s Legal Director. “Videos and photos of feedlot operations with unsafe and unsanitary conditions, like those unconstitutionally banned by Kansas’s law, are vital to protecting food safety. When officials fail to enforce food safety standards, private investigations can be the only way to alert consumers and prevent contaminated meat and eggs from entering the food supply.”

The Animal Legal Defense Fund led coalitions that successfully struck down significant parts of Ag-Gag laws in Utah and Idaho. Litigation against Ag-Gag laws is pending in Iowa and North Carolina.