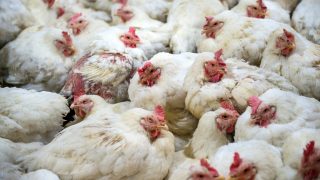 The Shell Egg Food Safety regulations were instituted after the passage of Proposition 2, a farm animal protection law that California citizens voted for overwhelmingly in 2008.

Part of Proposition 2 mandates that hens used by the egg industry be given enough space to spread their wings without touching either side of the enclosure or other hens. It is standard for factory egg farms to intensively confine hens in cages so small that a bird has the space of only a single sheet of paper, preventing most natural behaviors.

“Californians have made it clear they care about the conditions of egg-laying chickens by passing Proposition 2,” says Animal Legal Defense Fund Executive Director Stephen Wells. “It is their right to ensure it is being enforced and that chickens are benefiting from the landmark animal protection law.”

In response to the Animal Legal Defense Fund’s initial request, the CDFA produced some records but redacted cage floor dimensions on the grounds that they constitute trade secrets.

The Animal Legal Defense Fund argues that CDFA’s claim of trade secrets is inappropriate because egg producers do not create their own cages. Instead, egg producers purchase cages from large companies that specialize in egg industry equipment. The dimensions of their cages are widely available and easily accessible.

Regardless, the release of these records are in the public interest. In addition to the California Public Records Act’s policy in favor of transparency, residents have a compelling interest in ensuring the law is enforced, and there is little information currently available regarding egg producers’ compliance with Proposition 2.