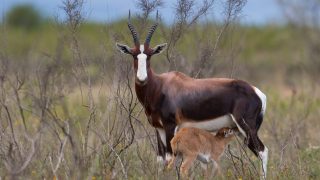 This week the Animal Legal Defense Fund submitted comments to the U.S. Fish and Wildlife Services (USFWS) in opposition of the renewal of three captive breeding wildlife permits and the renewal of one take permit — all submitted on behalf of commercial canned hunting operations located in Texas that profit off the endangered species’ deaths.

The Animal Legal Defense Fund, the preeminent legal advocacy organization for animals, argues the canned hunting operations — Deep Creek Ranch in Valley Mills, KJC Ranch in Lohn and Priour Brothers Ranch in Mountain Home — do not qualify for renewal due to a myriad of flaws and deficiencies in their application.

“The fact that these permits — which are designed to protect endangered species — were issued to commercial canned hunting enterprises in the first place was negligent,” says Animal Legal Defense Fund Executive Director Stephen Wells. “Now there is an opportunity to correct this error by denying the permits’ renewal.”

First and foremost, the issuance of these permits — as required by the Endangered Species Act — must be for activities that enhance and benefit the threatened or endangered species. Canned hunts are antithetical to the interest of the species and are instead conducted for profit. In a canned hunt, animals are held in a confined, fenced in area and hunters pay thousands of dollars to kill a specific species of animal in captivity. The permits sought by the three so-called “ranches” combined include captive breeding rights for Red lechwe (threatened status) and the following endangered status species: Barasingha, Eld’s brown antlered deer, Arabian oryx and Scimitar horned oryx. The listed pricing to kill these animals goes from $2,750 to $9,000 per, with additional animals requiring a phone call for pricing.

Because the facilities are open to the public and engaging in exhibition of endangered species on their premises, the Animal Legal Defense Fund also argues each requires an exhibitor license — which they do not have — issued by the U.S. Department of Agriculture (USDA), just like zoos and other animal exhibitors. One of the business’s website even advertises paid access to non-hunters for “wildlife viewing” and “a toured photo safari” — which is explicit commercial exhibition. Additionally, due to the USDA exhibitor license provisions, all of the animals within the facilities — regardless of protective status — are subject to the protections afforded by the Animal Welfare Act (AWA). Noncompliance with any applicable governing laws requires permit renewal rejection.

Additionally, the applications are incomplete. Each is missing required information that is required for approval — and that additional point alone requires rejection.

If the permits are granted, the Animal Legal Defense Fund will review additional legal options.

The full comments are available upon request.