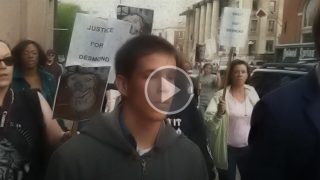 A.5315/S.3525, the New York CAAP bill, has been introduced in the New York Legislature and was referred to the Judiciary committees in both the Assembly and the state Senate. The bill is currently under consideration as the Legislature is in the second year of its two-year session.

“It’s long past time that our laws begin to recognize animals as the sentient beings that they are. Connecticut and Maine have made strides toward changing this view by implementing courtroom animal advocate programs,” says Assemblymember Linda B. Rosenthal (D/WF – Manhattan). “Under these programs, courts may appoint special advocates to represent the interests of abused and neglected animals, giving a voice to the voiceless. Similar to those appointed to represent the interests of children and other vulnerable crime victims, these advocates help monitor the case, review documents and attend hearings, ultimately ensuring that the best interests of the animals are served. I am proud to be the sponsor of legislation in New York State (A.5315) to create a CAAP program and look forward to continuing to work with the Animal Legal Defense Fund to pass it into law.”

Connecticut passed the nation’s first statewide CAAP law, also known as Desmond’s Law, in 2016. The film tells the story of Desmond — a dog who was found dead in a trash bag in the woods, after being strangled to death — and the campaign by local advocates and state legislators to pass the law in his name.

In January 2020, Maine adopted a similar law, known as Franky’s Law, to help protect animals in the state. Similar bills are currently being considered in New Jersey and Florida.