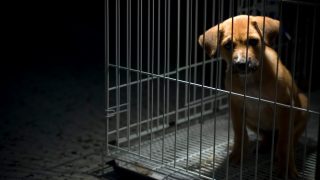 In 2008, as part of the Pennsylvania Dog Law, the Pennsylvania state legislature enacted some of the most comprehensive regulations on commercial dog breeders in the nation. The state had become, in the words of one legislator, “the puppy mill capital of the East,” and sought to strengthen the law primarily to ease the suffering of mother dogs used for breeding. Commercial breeders commonly kept mother dogs in cages with only metal wire strand flooring, and many dogs were literally never let outside for exercise.

Used because it’s cheap and easy to clean, such wire flooring is not only uncomfortable but also harmful to stand on. Paw deformities and other serious injuries often result from such conditions. The amendments to the Pennsylvania Dog Law were intended as a remedy, banning the use of metal wire strand flooring and requiring “unfettered access” to outside exercise for dogs over 12 weeks of age.

But such laws are only meaningful if they’re enforced. Under pressure from puppy mill owners, the Pennsylvania Department of Agriculture soon issued two broad exemptions to the law. One allowed 50 percent of the flooring to be metal wire strand in cages where mothers with nursing puppies were kept, while the other said the Department wouldn’t enforce the law if breeders provided “daily” access to an exercise area for nursing dogs.

The Animal Legal Defense Fund went to work for mother dogs and their puppies. With three Pennsylvania residents and supporters, we challenged the regulations through multiple Pennsylvania state agency review processes. Those review boards sided with the Department of Agriculture every time.

Seeing no other option, we sued the Department, asking the court to strike down the unlawful exemptions. On Sept. 9, 2016, a panel of judges ruled in our favor. Finding that the Department’s actions were contrary to the clear purpose and intent of the Dog Law, the court struck down the exemptions.

Now puppy mills in Pennsylvania are required to provide all dogs with safe, comfortable flooring and with free access to fresh air and room to exercise. Consistent with the will of the people and with the intent of the lawmakers who passed the law, Pennsylvania puppy mills will no longer be able to profit while ignoring basic needs of mother dogs. This is a significant step forward in the fight against puppy mills.