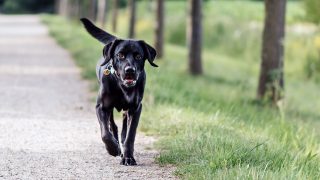 Summary: Proposed amendments to Germany’s Animal Welfare Act aimed at ensuring the species-specific needs of dogs are met include minimum exercise requirements, tethering prohibitions, and a ban on exhibiting dogs who have been bred to have characteristics that cause physical distress. Although widely misreported as a mandatory dog walk law, the regulations are in fact less ambitious. However, as they are intended to ground animal protection law in scientific findings about the needs of animals, the proposed amendments are a step in the right direction.

“Dogs are not cuddly toys. They also have their own needs, which need to be taken into account.” ­­– Agriculture Minister Julia Klöckner

New legislation proposed by Germany’s Federal Ministry of Food and Agriculture would mandate minimum exercise requirements for dogs beginning next year. Agriculture Minister Julia Klöckner, who spearheaded the legislation, said the regulations are based on “new scientific findings about the needs of dogs.”

The exercise mandate is one of multiple draft amendments to Germany’s Animal Welfare Act meant to ensure that dogs are kept in a species-appropriate manner. They also address the problem of isolation when dogs — social animals by nature — are left alone for long periods by stipulating they must be allowed to interact with their caregiver “several times a day.”

A dog is required to have: 1.) exercise in the outside of a kennel at least twice a day for a total of at least one hour, and 2.) contact several times a day with the person who keeps, looks after or has to look after the dog (caregiver). Running out [exercise] and social contacts are to be adapted to the breed, age and health condition of the dog. . . Number 1 may be waived if the health of the dog does not allow it.

Although widely reported as a mandatory “dog walking law,” the amendment does not specify that dogs must be walked — merely that they be let outside twice per day for at least an hour in total.

Criticisms Based on Inaccurate Reporting: Is it a Dog Walking Law? 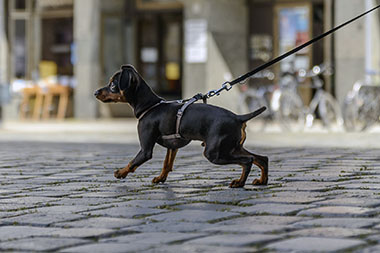 Germany’s proposed “dog walking law” received widespread media coverage, along with a fair amount of consternation, as one NPR headline described the public reaction. However, much of the criticism was based on a misunderstanding of the draft regulations.

Many news outlets reported that the law would require dogs to be given a minimum of two walks per day, with each walk being at least an hour long. This seemingly rigid mandate resulted in a predictable outcry of purported concern for dogs who may not need, want, or be able to withstand two hour-long walks per day, for example older dogs or those with health issues.

It would indeed be troublesome if the draft regulations did not contain exceptions based on individual dogs’ needs, especially given the rationale for the new regulations is exactly that: to recognize and respect the needs of dogs. Despite what was reported in several news stories and attention-grabbing headlines, the text of the proposed law mandates a total of one hour of “exercise” per day, not two. Furthermore, “exercise” is defined as being let out of a kennel (if the dog is kept in one) or being let outside (for example into a yard) — not as an actual walk.

The so-called dog walker obligation caused the greatest sensation. In the future, dogs should be allowed to run outside of a kennel twice a day for at least one hour in total. It doesn’t have to be a walk, exercise in the garden is enough. So far, the Animal Welfare Dog Ordinance has spoken of ‘sufficient exercise in the open air’, but there has not been any specific information on frequency and duration.

In addition, while this has generally not been reported, the draft amendments do contain exceptions, stating the exercise requirement can be “adapted to the breed, age and health condition of the dog” and “may be waived if the health of the dog does not allow it.”

Criticisms Based on the Needs of Dogs: Is it Enough? 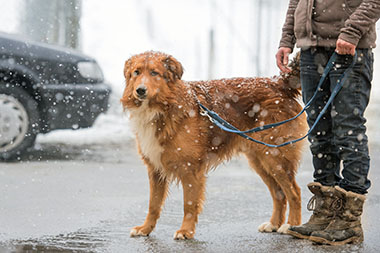 While some criticized the draft law as being too strict — whether based on a misunderstanding of what it mandates or a general aversion to increased regulation — others would like to see it go further. While some news outlets claimed this legislation would give dogs the “legal right to walks,” this is not the case. However, that would be a positive step provided mandates regarding frequency and duration of exercise took into account the needs of individual dogs, including the relatively small number for whom regular walks would be a detriment to their wellbeing. The more likely pitfall of quantification is that resulting guidelines will be too minimal. And that is a critique of this law as well.

According to Der Spiegel, Katrin Umlauf, advisor for dogs at the German Animal Welfare Association,1  said that she “welcomes the obligation to venture out” but “would wish for more prescribed time. With young, very happy animals, an hour can be very short.”

The German Animal Welfare Association, which submitted detailed notes to the Federal Ministry of Food and Agriculture on the draft regulations, noted in a statement that while they are a step in the right direction, improvements are needed to make the protections more robust:

If you want to protect dogs, you should also require owners to identify and register their four-legged friends. We are still missing that in the draft. This also applies to requirements for appropriate upbringing and animal-friendly training methods for dogs, which are urgently needed. In addition, compulsory expertise is required, which future dog owners must prove before purchasing a dog. The prohibition of the exhibition of torture breeding is not enough as long as the term torture breeding is not specified in the Animal Welfare Act.

Regarding the exercise requirement in the draft regulations, younger or more energetic dogs will need more exercise than that provided by being let outside for a total of one hour per day. Dogs who are let into yards alone often sit or lie in one place and cannot be expected to exercise themselves — walks, interactive play, or other proactive engagement on the part of the guardian is needed to ensure social animals like dogs receive proper exercise. The needs of individual dogs are different and vary by age, health status, and personality, but all dogs, especially those in urban and suburban environments, depend on their caregiver to provide opportunities for adequate exercise and mental stimulation. 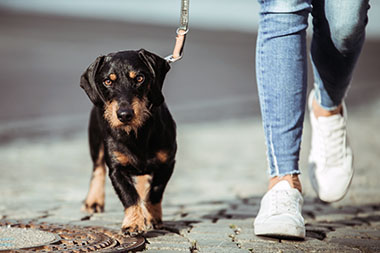 Whether too strict or not strict enough, some have also questioned how — and whether — this law will be enforced as it is difficult to monitor caregiving behavior that primarily occurs in the private sphere. Klöckner has said the intent of the law, which will be enforced at the state level, is not to have authorities knock on doors to check up on people. Rather it gives law enforcement a tool in cases where it is clearly observable that a dog is perpetually confined to a kennel or home in violation of the minimal one-hour per day outside requirement.

Some have also suggested this law may be intended to crack down on commercial dog breeders and kennel owners more than individual households. According to the BBC:

A spokeswoman for the agriculture ministry said it was very unlikely private dog owners would receive police visits to check whether they had taken their pooch for a walk. She said the emphasis would be on ensuring that dogs kept in kennels were treated well.

Potential enforcement difficulties aside, new laws can serve a signaling or expressive function in addition to a punitive one — displaying a shift in social norms, in this case around respect for the needs of dogs and recognition that, currently, these needs are not being met in many instances.

Also included in the draft amendments to Germany’s Animal Welfare Act are bans on tethering dogs with a chain or leash for long periods, with some exceptions around dogs used for work, and on exhibiting dogs (in dog shows) who have “torture2 breeding characteristics.” This phrase refers to traits that cause pain or physical distress — for example, the breathing difficulties commonly experienced by brachycephalic breeds with shortened snouts, such as pugs and bulldogs. The latter adds to existing prohibitions in German law on the showing of dogs whose ears or tails have been amputated (also called “cropping” and “docking,” respectively — practices that are unrestricted in the U.S.).

Of the ban on exhibiting overbred dogs, Klöckner said: “Animals are not meant to meet the questionable aesthetic wishes of their owners. They are not mascots. If breeding prevents any kind of species-appropriate behavior, that is cruelty to animals.” NPR also reported, citing a ministry press release, that “the new rule is meant to remove incentives to breed such dogs and reduce demand for them.”

The amendments also include new regulations pertaining to dog breeders, stating that one person may  look after no more than three litters of puppies at a time and must spend four hours per day in contact with them. An amendment pertaining to farmed animals imposes stricter limitations on the amount of time they may be kept on transport trucks in high temperatures.3

Germany’s proposed amendments regarding the welfare of dogs are in keeping with global trends in animal law and the Animal Legal Defense Fund’s vision of a legal system that protects animals’ right to flourish and live their lives according to their emotional and physical capacities. In the U.S., standards for the well-being of dogs and other companion animals usually reside in state animal cruelty laws, which typically address only very basic needs, such as food, water, some type of shelter from the elements, and sometimes basic veterinary care. Animal cruelty laws in the U.S. are generally silent on the social, behavioral, and psychological needs of animals — including needs for exercise and companionship.

These amendments are still in draft form and it is uncertain what final form they will take – whether they will remain the same, be stronger, or weaker.4 However, the move to revise animal protection laws in light of scientific evidence to include important species-specific needs — beyond the bare minimum needed for survival, like food and water — is undoubtedly a step in the right direction. One hopes Germany’s amendments, and the debates they have sparked, will also serve an educational function by raising societal awareness that, in the words of Minister Klöckner, “dogs are not cuddly toys.” They have their own needs which must be taken into account by individual caregivers and the legal system.