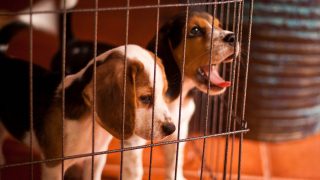 More than 40 million households provide homes to at least one dog in the US. We are a nation of avowed dog lovers. Yet nearly 4 million dogs enter our shelters every year and more than a million of them are euthanized. Given those statistics it’s difficult to imagine why we tolerate puppy mills that churn out thousands of sick dogs each year—or the stores that sell them—for profit.

These are questions running alongside Animal Legal Defense Fund’s lawsuit against Barkworks, a pet-store chain in four Southern California counties.

In October 2015, Animal Legal Defense Fund broadly expanded its lawsuit against Barkworks–initially filed in Orange County in September 2014 on behalf of a handful of individual plaintiffs–by adding class-action allegations. That would mean filing on behalf of a broad class of misled purchasers of the chain’s puppies.

Since September 2014, Animal Legal Defense Fund and pro bono attorneys working on the case have uncovered numerous documents detailing the widespread nature of Barkworks’ deception, thus making a change in the scope of the lawsuit necessary.

Animal Legal Defense Fund’s lawsuit alleges that Barkworks intentionally violated California consumer protection law by explicitly stating that its puppies were “not from puppy mills” and had been examined by veterinarians before being sold. Buyers soon learned that these assertions were false when their new puppies fell seriously ill, in some cases within hours of leaving the store and when these consumers tracked down the source of their puppies.

Many pet stores that continue to sell live animals view small, vulnerable puppies and other animals for sale as mere products—cuddly and lovable when presented through the pet-shop window to lure consumers, but ultimately line items on a balance sheet.

For these business owners, it makes financial sense to buy from puppy mills—places that will continue to churn out litter upon litter of puppies at low wholesale prices without concern for the health or well-being of the dogs. Still, the “puppies for sale” model has improved dramatically at many pet-supply retailers, where grooming, doggie daycare, high-end pet products, and immunization clinics have replaced dog-and-cat sales as revenue generators.

And well over 100 cities and counties in the U.S. have banned the retail sale of cats, dogs, and in some cases even rabbits, in part to curtail the sale of mill-bred animals.

Such changes are coming about because Americans are getting more familiar with the details of commercial exploitation of animals. We understand that animals bred in close confines and unclean conditions in commercial facilities might well be expected to begin their lives battling short-term issues—distemper, respiratory infections, mange and various parasitic diseases. And most dog lovers—of mutts and purebreds alike—recognize that, longer term, excessive inbreeding and short-cutting of thoughtful animal husbandry practices will lead to increased rates of lifelong health problems like hip dysplasia, hyperthyroidism and glaucoma, among others.

None of that comes as a surprise to any of us. What is startling is the scale and the everyday nature of the problem: how often such truths are hidden by brokers, breeders and retail establishments, how often dogs and cats and other companion animals are bred purely for profit without concern for their welfare, and how little awareness people have of these practices.

Consumers still purchase puppies from retail pet stores, reassured that a breeder is “USDA-licensed” or “AKC registered.” However, most consumers don’t realize that these endorsements guarantee little if anything about the number of dogs at a facility, a dog’s breeding history, or the life quality of breeder dogs. Moreover, the AKC is funded largely by its own registration fees—for over 1 million dogs each year by its own account—giving the organization an incentive to encourage irresponsibly high birth rates from its “registered breeders.”

Fortunately, the culture is waking up to the problem, not just about the continued existence of puppy mills, but about the realities of the pet-store industry and its sales pitches, and Animal Legal Defense Fund is eager to help. Barkworks stores have been picketed and boycotted; law enforcement has shut down mills where puppies were neglected, underfed and overcrowded. And now Animal Legal Defense Fund is grateful to be well positioned and well armed to litigate for change that will close down avenues for such behavior.

The puppy-mill problem stems in part from people’s continued willingness to view and treat non-human animals as products rather than sentient beings. That’s one reason Animal Legal Defense Fund is especially moved by the opportunity in this case—so much of our work concerns the advancement of the culture’s recognition of animals as more than someone’s property, more than viable product.