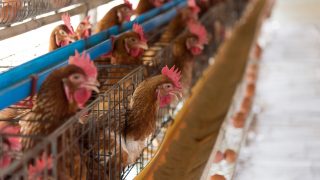 San Francisco, CA — The Animal Legal Defense Fund won an important appeal against the Food and Drug Administration (FDA) in an ongoing dispute over whether the agency must provide information about hen population and living conditions that it collects from large factory egg farms. On Friday, the Ninth Circuit Court of Appeals reversed a lower district court’s judgment from 2013 allowing the FDA to withhold that information, and sent the case back to the lower court so the Animal Legal Defense Fund can argue its case at trial.

The original lawsuit stems from the Animal Legal Defense Fund’s 2011 Freedom of Information Act (FOIA) request regarding total hen population and population density at factory egg farms. This is information the FDA records during inspections of factory egg farms as required by the 2009 Egg Safety Rule. The Animal Legal Defense Fund sued the FDA in 2012 when the agency refused to provide information.

The upcoming trial will decide whether the FDA’s release of the information on hen population and living conditions is, as the FDA argues, “likely to cause competitive harm” to the factory egg farm facilities, and therefore exempt from disclosure under FOIA.

It is standard practice in the egg industry to confine hens in small “battery cages” where millions of hens may be in cages so small each bird only has as much space as a sheet of paper. This population density causes unsanitary conditions and an increased risk of diseases such as salmonella and bird flu in addition to severe animal welfare concerns.

The new decision from the Ninth Circuit is an important step in the Animal Legal Defense Fund’s efforts to compel the release of information about factory egg farms. In 2013, the Northern District of California ruled that FDA could withhold most of the information. The Animal Legal Defense Fund appealed that ruling to the Ninth District Court of Appeals where it argued it was entitled to a trial to resolve the factual disputes in the case.

The three-judge panel from the Ninth Circuit initially deferred to the district court and ruled against the organization in April 2016. Recently, the Ninth Circuit reheard the Animal Legal Defense Fund’s appeal en banc, and set groundbreaking precedent by providing less deference to district courts that resolve FOIA cases on summary judgment without trial.

Applying that new standard, the original three-judge panel today ordered that the case be sent back to the district court for a trial.

“Public health and safety is on the line, and the people have a right to know how the FDA is protecting them,” says Animal Legal Defense Fund Executive Director Stephen Wells. “Details of animal welfare and the risk of disease outbreaks that affect human health are too important to remain hidden from the public.”