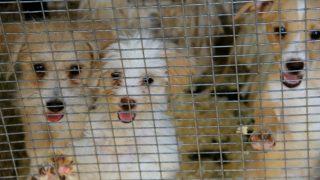 Philadelphia, PA — Today the Commonwealth Court of Pennsylvania allowed a lawsuit filed by the national nonprofit Animal Legal Defense Fund to move forward against the Pennsylvania Department of Agriculture.

Last summer, Animal Legal Defense Fund sued the Department for passing watered down regulations that gutted Pennsylvania’s historic “Dog Law.” The court found that “judicial scrutiny is required,” given the Department’s passage of weak regulations that ensure the continued suffering of mother dogs and their puppies despite state laws that require greater protection.

Moreover, the Court observed, dogs and those who ultimately purchase them are the obvious beneficiaries of the health and safety protections provided by the Dog Law, so Animal Legal Defense Fund’s lawsuit just makes sense.

Where the state’s Dog Law requires nursing mothers and puppies to have unfettered access to an outdoor exercise area, the Department’s regulations allow nursing mothers and puppies to be caged all day; and while the law requires the elimination of wire strand flooring, the regulations allows puppy mill owners to confine dogs on this notoriously painful material. Wire flooring leads to severe injuries including splayed feet, cysts on paws, and painful abrasions. The discomfort of living in such conditions has been linked with permanent behavioral issues, sometimes so severe the afflicted dog must be euthanized.

The Department has also drastically reduced exercise space requirements for nursing mothers. Because mother dogs are bred twice a year, they spend more than half their lives in restricted enclosures with painful flooring and inadequate space to move around. Pennsylvania confines more than 100,000 dogs in kennels.

“Today the Commonwealth Court is making sure Pennsylvania is held accountable for failure to follow its own law and protect nursing mothers and their puppies,” said Stephen Wells, executive director of Animal Legal Defense Fund. “The time has come to put an end to puppy mill breeders, and this suit will finally give the Dog Law teeth.”