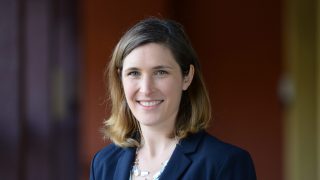 As a staff attorney at the Animal Legal Defense Fund, Kelsey litigates and engages in regulatory advocacy to protect the lives and advance the interests of animals. Her practice centers around combatting Ag-Gag laws and illegal and deceptive business practices by animal industries, including the meat industry and pet stores. Kelsey also helps defend animal protection laws from legal challenges by industry and engages in administrative litigation and regulatory advocacy to protect farmed animals at slaughter.

Kelsey joined the Animal Legal Defense Fund as a Litigation Fellow in 2014. Prior to this, she served as a legal intern with Compassion Over Killing, and a legal extern to the Hon. Justice Laurence D. Rubin of the California Court of Appeal for the Second District. Kelsey graduated from UCLA School of Law in 2014, where she chaired the UCLA Animal Law Society.

Kelsey’s writing has appeared in the Journal of Land Use & Environmental Law, and her commentary has appeared in news outlets including NBC News, Bloomberg, and The New Republic. She has presented on diverse animal protection subjects at legal conferences, roundtables, and symposia nationwide.

Kelsey lives with her family in Vermont and, when not litigating for animals, enjoys running, skiing, scuba diving, and vegan baking.