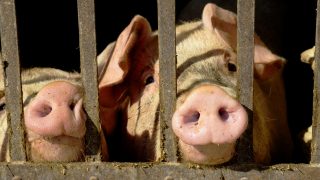 Cruel high-speed pig slaughter is about to go nationwide. Earlier this month, the United States Department of Agriculture (USDA) issued a final rule removing all line speed limits and allowing pig slaughterhouses across the country to police themselves – leaving millions of pigs vulnerable to increased suffering and terror.

A provision in the House Agriculture Appropriations bill would halt this rule (scheduled to go into effect on December 2nd) until the inspector general has studied the issue further.  Please urge your senators to stop the high-speed pig slaughter rule.

This rule expands a problematic pilot program that allowed five of the nation’s largest pig slaughterhouses to increase the speed at which pigs are slaughtered. At one of these plants, killing pigs for Hormel Foods products like Spam and Natural Choice deli meats, an undercover investigation documented horrific abuse as employees struggled to keep up – including illegally dragging, kicking, beating and excessively shocking pigs with electric prods.  Other evidence has confirmed numerous instances of pigs who have not been rendered unconscious before being killed – resulting in animals being boiled alive in scalding tanks and left to bleed out.

The Animal Legal Defense Fund submitted comments to the USDA, urging the agency not to go forward with this dangerous rule. We’re committed to continuing to fight it through every possible avenue. Help us protect pigs and contact your senators today.