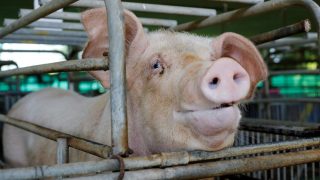 The factory farming industry is seeking to overturn California’s landmark farmed animal protection law, Proposition 12. The law bans certain extreme confinement practices for animals on factory farms in California and requires animal products sold in the state to comply with those requirements. Multiple industry groups have challenged Proposition 12 in court, and the Animal Legal Defense Fund is part of a coalition that has successfully defended the constitutionality of the law.

Now, following industry groups’ most recent loss, they’ve asked the Supreme Court to review the case. If the law were to be overturned, it could have spiraling negative impacts for animals, potentially undermining other state laws such as those protecting animals in puppy mills, fur farms, and more.

Please add your name to the petition by completing the form below.

Under a previous Secretary of Agriculture, the USDA came out in favor of animal agriculture industry groups’ challenge to the California law.

Proposition 12 was overwhelmingly approved by California voters, who were clear in their intention to protect mother pigs, egg-laying hens, and calves raised for veal from some of the most inhumane forms of intensive confinement.

The law’s constitutionality has been affirmed in rulings from multiple courts, including the U.S. Court of Appeals for the Ninth Circuit. In every instance, courts have held that Proposition 12 does not pose an unconstitutional restriction on commerce.

Meanwhile, Proposition 12 not only protects animals from cruel extreme confinement — it also has important implications for public health, as the intensive confinement of farmed animals presents a food-safety risk and poses a significant threat for the spread of zoonotic disease.

This issue is of critical importance now, as animal agriculture industry groups have asked the Supreme Court to review this case. A Supreme Court ruling against Proposition 12 could have major unintended consequences, potentially undermining any number of state laws governing food safety, animal protection, and more.

We urge you to reverse the USDA’s earlier position, which undermined the will of the voters and the rights of states to legislate, and publicly state your support for Proposition 12.

Thank you for your consideration.