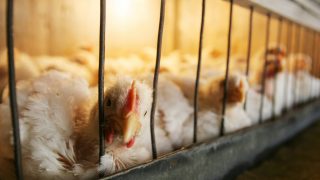 If your state representative sits on the Texas House Agriculture & Livestock Committee, we need your voice! Please call (preferred) or email your representative and ask them to oppose SB 1884 – a dangerous bill aimed at stopping whistleblowers from exposing animal cruelty. This bill has already passed the Texas Senate – your voice is urgently needed to prevent it from becoming law.

SB 1884 criminalizes undercover investigations at animal agriculture facilities like puppy mills, factory farms, and slaughterhouses. Ag-Gag bills like SB 1884 are designed to prevent the public from learning about animal cruelty. Undercover investigations have revealed severe animal abuse on factory farms—animals beaten, maimed, and mutilated. Our ability to investigate, document, and publicize corporate agriculture’s abuses is critical to well-being of animals and our own health and safety.

SB 1884 is an assault on our First Amendment rights. The bill’s sponsor claims that this bill is about biosecurity – it’s not. Several effective state and federal laws already protect agriculture companies from biosecurity threats. SB 1884’s result would be to suppress free speech.

If you live in Texas, here’s how you can help:

Thank you for speaking up for the millions of animals who suffer behind closed doors on factory farms, puppy mills, and slaughterhouses!

THIS ACTION IS FOR TEXAS RESIDENTS ONLY.