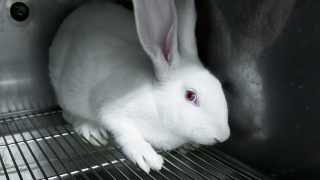 Countless animals, including rabbits and mice, are suffering needlessly in experiments to test cosmetics like shampoo and eye shadow. Not only can safe cosmetics already be made from existing ingredients, but there are new technologies that are more effective and more reliable for testing product safety. These methods are often less expensive and faster than tests that use animals.

New Jersey has always been a leader on this issue, previously enacting a law to limit product-testing on animals where alternative non-animal tests are available. The state now has an opportunity to remain at the forefront by passing the New Jersey Humane Cosmetics Act, A.795/S.1726, to ban the sale of cosmetics that were developed using animal tests on or after January 1, 2020.

Your legislators need to hear from you.

Please call your state Senator and two state Assembly Members and then send follow-up emails urging them to support this bill.