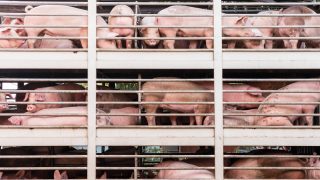 This action is closed

Iowa lawmakers are at it again, attempting to enact an unconstitutional Ag-Gag law — while still fighting a federal court decision striking down a previous version of this same law, as violating the First Amendment.

In January, the U.S. District Court for the Southern District of Iowa struck down Iowa’s Ag-Gag law, holding that the ban on undercover investigations at factory farms and slaughterhouses violates the First Amendment. The Animal Legal Defense Fund led the coalition of animal, environmental, and community advocacy groups in challenging the law’s constitutionality.

Iowa has appealed the district court’s decision — though given the ample precedent finding Ag-Gag laws to be unconstitutional, their odds of success seem slim.

Meanwhile, at the behest of industrial agriculture interests, state representatives have introduced new legislation, House File 649 and Senate File 519, which, again, aims to criminalize whistleblowing on factory farms and other agricultural facilities. This new bill is unconstitutional, and were it to become law will likely be struck down by the courts — once again wasting Iowa taxpayers’ money.

The ability to investigate, document, and publicize corporate agriculture’s abuses is imperative both to the well-being of animals across the nation — and to public health and safety.

Factory farms want to keep their cruel practices hidden from the public, but the public deserves the truth about the billions of animals suffering on industrial farms and whether laws are being broken, jeopardizing food safety, workers’ rights, and environmental standards.

Help put an end to House File 649 and Senate File 519 by sending a message to your legislators urging them to oppose this harmful, wasteful, unconstitutional legislation.