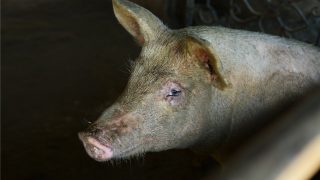 This action is for Iowa residents only.

A dangerous Ag-Gag bill is close to becoming law in Iowa. HF 775 is aimed at criminalizing whistleblowing and undercover investigations in agricultural facilities, thus “gagging” activists and others who expose animal abuse in factory farms and slaughterhouses.

Undercover investigations and whistleblowers have revealed severe animal abuse on factory farms — animals beaten, maimed, and mutilated. The ability to investigate, document, and publicize corporate agriculture’s abuses is not only critical to protecting animals but also our own health and safety. Factory farming is already responsible for numerous zoonotic disease outbreaks that have been deadly to humans, including 1997 Bird Flu (H5N1) and the 2009 Swine Flu (H1N1). It’s essential that health and safety violations on factory farms are promptly uncovered and addressed, not criminalized.