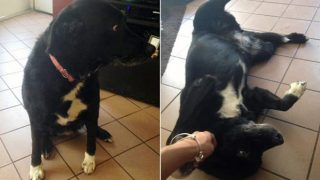 Bella, an eleven-year-old Shepherd mix, was killed on December 23, 2016 by her caregiver. The defendant tightened a zip tie around her neck, stuffed her in a garbage bag, and beat her with a metal shovel. Due to the extent of her injuries, Bella was euthanized. Despite the seriousness of the crime, Bella’s abuser received only four months in county jail – a sentence that falls far short of justice for Bella.

Sign the open letter to Governor Cuomo in support of Bella’s Bill.

This important bill would, among other changes, transfer animal cruelty laws out of the Agriculture & Markets Law and into the Penal Code. This sounds like a small detail, but it’s not. This move will ensure crimes against animals are treated as “real” crimes by law enforcement officials. The bill also enhances penalties for people convicted of intentional animal abuse.